Family of William C. Sheavly '50 honors his life with gift to UA 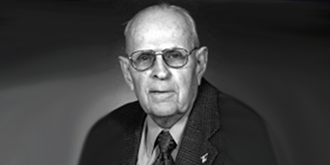 William "Bill" C. Sheavly may not have spent many of his 90 years in Akron, but the time he did spend as a student at The University of Akron - where he was a member of Theta Chi and earned a degree in 1950 - made a lasting impression. So much so, that following Sheavly's death on January 23, 2014, his four children were delighted to honor his life by presenting the University with a generous gift earmarked for scholarships.

The gift from Bill Sheavly's estate has been designated as the first gift toward UA's newly established BRIDGE Scholarships, which assist deserving, full-time UA students complete their degrees by providing funds for tuition costs that are not covered by merit scholarships or state and federal grants.

"My father had a real fondness for The University of Akron and what it did for him," wrote Sheavly's son, William H. Sheavly of Virginia Beach, Va., in a letter to the University, "which is why I am pleased to tell you that on behalf of my brother Mark of Reisterstown, Md., and my two sisters, Rebeca Thomas of State College, Pa., and Ann Wilmer of Westminster, Md., that The University of Akron is to receive a gift from the Sheavly Trust for academic scholarships."

Born in Morgantown, W.Va., Bill Sheavly spent his youth in Rochester and Canadaigua, N.Y., and graduated from Canadaigua Academy. He enrolled at The University of Akron but left to enlist with the U.S. Army following the attack on Pearl Harbor. Bill spent his enlistment with the 69th Infantry Division and the 29th Division in Europe as a driver and chauffeur and received numerous awards, including the coveted Combat Infantryman Badge. After his honorable discharge in 1946, he returned to his studies at UA and earned a bachelor's degree in business administration.

By all accounts, the younger Sheavly was spot-on when he wrote, "Dad had a remarkable business career. He loved retail, and it was with him until the very end."

After earning his degree from UA, Bill joined Western Auto Supply and worked in Ohio, New York, Pennsylvania, and eventually Maryland. Bill served in a number of capacities - from running a store to overseeing a group of stores to advertising - until his retirement at age 55. The seasoned salesman then went to work as an independent representative for Curtis Industries, with automotive customers throughout the Baltimore area in a territory so large and lucrative it was divided into thirds after his second retirement at age 70. Still not content to enjoy his golden years, Bill volunteered his expertise at the Reisterstown Senior Citizen Center and at the time of his death was the store manager for Westminster Ridge, the retirement community where he resided.

Bill's life included community involvement as well. He was a member of the Oriole Advocates, who gave away souvenirs at Orioles games, and he spent two decades as a volunteer with the Baltimore County Police Department. He and his late wife, Reba Jean, also traveled the world, attending functions and reunions with the 69th Infantry Division Association and were honored for their 10-year service as souvenir chaircouple.

"Dad was a funny, well-liked man with a quick wit, and everyone fondly called him the Mayor of Westminster Ridge because he was so involved in all kinds of activities," wrote William in his letter, "so, on behalf of all of us who loved him dearly, please accept the enclosed check in his honor and his love of The University of Akron."

The University of Akron and every student who will benefit from a BRIDGE Scholarship are grateful for the thoughtfulness and generosity of the Sheavly family.

ABOUT BRIDGE SCHOLARSHIPS
When it comes to earning a college degree, the greatest obstacle can be the funds to do so. Knowing this, The University of Akron established BRIDGE Scholarships in 2014 for deserving, full-time students as a way to bridge the tuition gap - those costs not covered by merit scholarships or state and federal grants. BRIDGE Scholarships allow students to enroll full time and remain focused on their studies, reduce drop-out rates, decrease financial stress, and shorten the road to graduation - contributing significantly to student success.